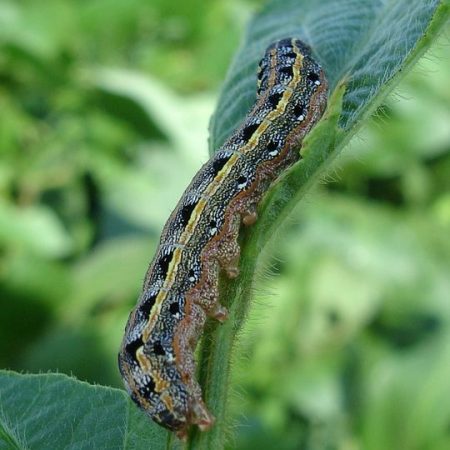 An army worm is a green-striped caterpillar larvae of the adult army worm moth. It’s called army worm because it travels in small armies with other worms. They destroy every crop in their path. Therefore, it’s important to know about them for control measures to be effective. The army worm is common pest of grass, but can also eat maize, beans, millet and other grains.

Armyworms lay their eggs in fluffy masses on crowns of seedlings as well as on leaves of older plants. In about 5-10 days, little caterpillars hatch and feed for several week after which they pupate and emerge as adults 10 days later.

Therefore, as you’re removing worms from the leaves of your crops, another generation is preparing to leave the soil to replace them. In fact, some species of army worms can lay up to six times. They may even be active all year.

How to control army worms

Natural predators such as birds and insects usually control army worm outbreaks , and other larvae predators. If you discover the pests when they are grown, you have to use insecticides which further damage the crops. Chemicals also kill the natural predators that should be controlling the army worms. So, to manage armyworms:

1. Try not to use harmful pesticides. Also, avoid practices that can destroy beneficial insects – your first line of natural defense against pests.

2. Use traps to monitor the arrival of adult army worm moths. When you first spot them, check for the distinctive white dot on their forewings. If you find it, then it’s time to inspect your crops.

3. Search for larvae and signs of damage. You can find the caterpillars feeding on the undersides of leaves and on new growths.

4. Handpick any worms you discover and DON’T crush them. Instead drop them in a bucket of soapy water.

5. Trichogramma wasps help to parasitize any newly laid eggs. So, release these tiny beneficial insects- 1mm or less. What they do is insert their eggs inside of pest eggs, killing them before they enter the crop-eating larval stage.

6. Other beneficial insects, such as ladybugs feed on armyworm eggs as well as the young larval stage. These insects can also help control other harmful pests, including aphids, earworms, cabbage loopers, a variety of mite and insect eggs.

When you plant. do it to also attract birds and beneficial insects. Birds love moths and will pull larvae from the crops. After harvest, til the soil before putting it to bed. This will give the birds a chance to pick off the exposed pupae.

7. If discovered late, use natural horticultural oil sprays on the crops that have signs of worm infestations. You can also use multi-purpose neem oil spray which also prevents fungus growth. It’s important that you don’t miss the undersides of leaves and junctions with stems.